Clare McCarty, the outgoing Group Chief Executive of Clanmil Housing Association, has been made an honorary member of the Royal Society of Ulster Architects. 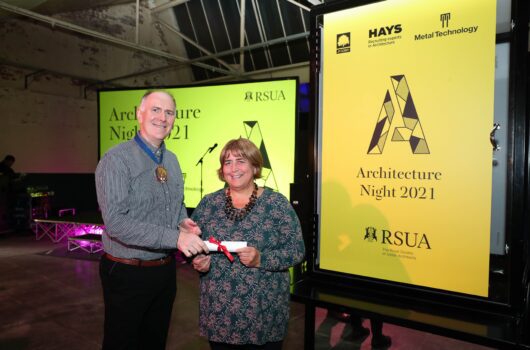 The honour, which was presented at the RSUA’s annual Architecture Night event, was conferred on Ms McCarty in recognition of her outstanding contribution to the built environment and the advancement of the role of architecture in creating more sustainable communities.

“Clare has led Clanmil Housing Association with distinction for over 37 years, creating quality homes, and building shared neighbourhoods across Northern Ireland. Under her leadership, Clanmil has been recognised with many awards for the design quality of its homes and its commitment to regeneration and the built heritage. On behalf of the RSUA, I wish to thank Clare for her immense contribution”. 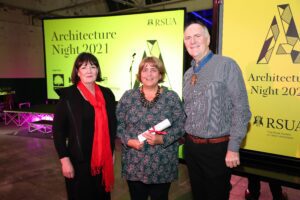 “I am delighted and proud to receive this prestigious honour and to have had the opportunity throughout my career with Clanmil to contribute to building homes for people to live better. Social housing has come a long way over the last 37 years and many challenges remain, not least in promoting shared neighbourhoods as a route to a more shared society.”

Under Clare’s leadership Clanmil has grown to become one of Northern Ireland’s leading housing associations, now providing more than 5,500 homes for over 10,000 people, with an annual turnover of £38M and employing 300 plus people.

Through Clare’s vision, the derelict historic Northern Whig building in Waring Street was transformed into a modern headquarters for Clanmil in 1999. This helped pave the way for the redevelopment of the Cathedral Quarter area.

Notes
The Royal Society of Ulster Architects (RSUA) is the professional body for chartered architects in Northern Ireland with c.850 chartered members.