Alpha Housing embraces ‘No Mow’ to Let Nature In

Alpha Housing has joined Ulster Wildlife’s ‘Let Nature In’ campaign to help reverse the decline in wildlife by creating nature-friendly gardens in its 40 sites across Northern Ireland. 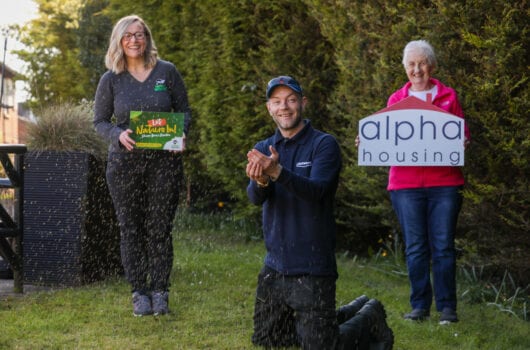 The local housing association, which specialises in providing homes to older people, is committed to creating nature-friendly habitats in the communal gardens of its sheltered housing schemes. ‘No mow’ areas on lawns, where native wildflowers can flourish, is central to this new approach.

Alpha tenants are helping lead this process. Early pioneers include the Wildlife Group at Montgomery Manor in Bangor, chaired by resident Victor Allister. The Group has transformed the scheme grounds, installing bird boxes, a bat box, insect shelters, a hedgehog shelter, and log piles, attracting many species of bird and insects. ‘No Mow’ areas on the communal lawns have seen a proliferation of wildflowers, including several types of orchid. 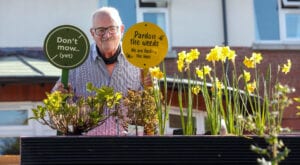 Building on this success, Alpha and its grounds maintenance contractor Outwork are establishing ‘No Mow’ zones on most of the housing association’s sites. Throughout the summer months, these will not be cut, allowing wildflowers to support pollinating insects which have been in steep decline. According to conservation charity Plantlife, simple changes in mowing can result in enough nectar for ten times more bees and other pollinators.

Beyond benefitting nature, Alpha is finding its green initiatives are greatly improving the well-being of elderly residents who get involved. Many have been affected by loneliness and isolation through the pandemic. However, nurturing their gardens for nature has provided valuable opportunities to gather socially outside, learn new things and benefit from the spring sunshine.

As well as committing to the ‘Let Nature In’ and No Mow initiatives, Alpha has pledged to plant hundreds of native trees across its sites over the next few years. For example, last December, a small silver birch wood was planted at Lowry Court in south Belfast.

“Alpha is delighted to be joining Ulster Wildlife’s ‘Let Nature In’ campaign. Working alongside our tenants, we’re committed to helping nature flourish across our sites. As major landowners, it’s important for housing associations to play our part in reversing the frightening environmental decline.

“Letting nature into our sites is already powerfully helping improve the wellbeing of our elderly tenants, many of whom are scarred by the loneliness and isolation endured through recent lockdowns.”

“We need to use every single space to help wildlife. Our gardens can become part of a wild network, creating vital green corridors and stepping stones that connect to larger wild spaces. The simple cost-effective steps being taken here at Montgomery in Bangor and across Alpha’s sites can have a big impact for nature.

“Ulster Wildlife is delighted to be strengthening our partnership with Alpha through the ‘Let Nature In’ campaign, and I would encourage other housing providers to get on board.”

“Over the last few years, the Montgomery Wildlife Group has been taking small steps to make our gardens more welcoming habitats for wildlife. As a result, nature is gradually returning to the site.

“I’m delighted that Alpha Housing has been inspired by our efforts and is taking action across its sites throughout Northern Ireland to ‘Let Nature in’. Here in Bangor, our Group’s next focus is reaching out to our neighbours to share our experiences and work together to transform this area for wildlife.”

For more information on the campaign, visit the Ulster Wildlife website.