As work begins on the construction by Clanmil Housing of 11 much needed new homes on the site of the former Mourne Observer printing works in Newcastle, new homes have been found for the well-known sign that has graced the building since 1975 – a replica of the 71 year old newspaper’s masthead. 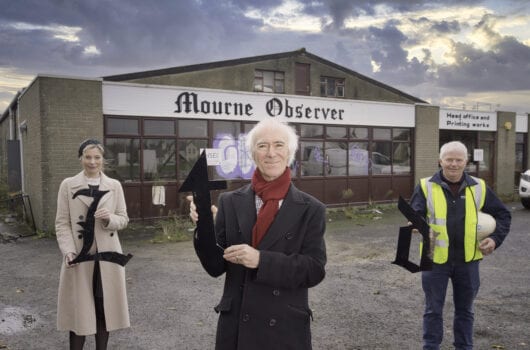 The letters from the sign have been handed over by Clanmil and building contractor, Kelly Brothers to the newspaper’s former editor, Terence Bowman.  Mr Bowman will distribute the familiar Old English style letters amongst former long-serving colleagues from his 35 years at the Mourne Observer. 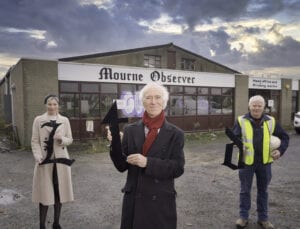 Hannah Kenny from Clanmil Housing and Aidan McArdle of Kelly Brothers hand the Mourne Observer sign over to former editor, Terence Bowman before the paper’s old print works are demolished to make way for 11 new homes.

After being based at several different locations in the centre of the town for over two decades, the Mourne Observer – founded by the late Jim Hawthorne in 1949 – moved to a purpose-built printing works on the site at Castlewellan Road in 1975.  This was home to the paper until it moved to a more modern office on the town’s Main Street in March 2019.  Printing at the Castlewellan Road site ended in April 1989 when it was outsourced to Morton Newspapers in Portadown.

Demolition of the print works will make way for 10 new semi-detached houses and a duplex bungalow.  These much-needed homes are scheduled to be ready to welcome families in Winter 2021.

The £1.6m development is being delivered by Clanmil with the assistance of grant support from the Department for Communities through the Northern Ireland Housing Executive.

“Every time I pass the old building the black Old English script letters catch my eye.  They are a landmark in the town and a reminder for me, and for many of my former colleagues, of the years we spent working, often very late into the night, to bring local news to our community.  By my calculations I must have walked past the Mourne Observer Ltd. sign, entering and leaving the Castlewellan Road building, more than 40,000 times.

“I am grateful to Clanmil Housing for allowing me to take possession of the letters for distribution amongst former long-serving work colleagues.  My final paper was the Christmas 2010 edition and I remember well pulling the office door behind me one last time and taking a long (but far from last) look at the Mourne Observer Ltd. sign.  It is lovely to have this little bit of history as a memento of those days.”

“We are delighted to be handing the sign over to Terence today, knowing that it’s going to a good home – in fact, a number of good homes!

“A good home is so important, and we’re excited to be starting work on eleven much needed new homes here in Newcastle.  We’re already looking forward to handing them over next Winter to people who really need them.”