Thanks to all the hard work of everyone involved in the Let’s Keep on Supporting People campaign, we’ve been shortlisted for 4 awards at the CIPR Northern Ireland Pride Awards

The Supporting People Programme, which provides some 882 housing related support services across NI, equips more than 20,000 vulnerable people to live independently and helps prevent problems that can result in hospitalisation, institutional care or homelessness.

Research has demonstrated that it is an ‘invest to save’ programme delivering net financial benefits by reducing demand on health, criminal justice and other public services. However, funding for SP schemes has been frozen for eight years, a ‘real terms’ cut of over 20%.

The Committee Representing Independent Supporting People Providers (CRISPP) is a coalition of charities and voluntary organisations, co-chaired by NIFHA and the Council for the Homeless NI. 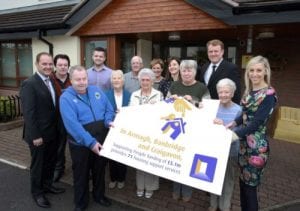 As part of its ongoing efforts to safeguard funding for Supporting People services, CRISPP engaged the services of leading PR agency Weber Shandwick to co-ordinate the Let’s Keep on Supporting People campaign. During 2017, the campaign highlighted a 5% funding cut and how this threatened vital services. Following this campaign, the Dept. for Communities announced an in-year non-recurrent allocation of £2.6m to SP providers and other important progress was made.

It is this campaign that has been short-listed in this year’s Chartered Institute of Public Relations NI Awards. The four categories it’s competing in are:

The winners will be announced at an Awards Ceremony on 19th October.