A Belfast-based football project set up to support disadvantaged men and women has secured a £10,000 grant as it prepares to travel to Mexico for the 2018 Homeless World Cup in November. 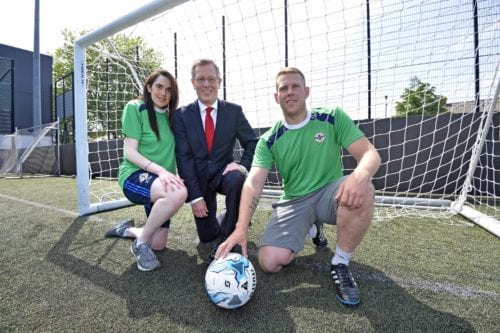 The winning project, Street Soccer NI, was recently announced as the recipient of Co-Ownership’s annual Social Fund, selected from dozens of applications received from charities and community groups across Northern Ireland.

The football project supports some of the most vulnerable groups in Northern Ireland including homeless people, people with drug and alcohol dependency, mental health issues, ex-prisoners, refugees, asylum seekers and the long-term unemployed.

The money will be used to implement a Homeless World Cup development project which will enable Street Soccer NI to roll out a programme of training and support initiatives in the run up to and after the tournament including housing and tenancy support, employability, opportunities to gain accreditation and qualifications in coaching and refereeing, as well as practical support for mental health issues and addiction intervention.

A sense of belonging

Justin McMinn, Street Soccer NI Co-founder and Coordinator, said: “For the past eight years we have been using football as a release and a way for the homeless, people living with mental health issues and those with alcohol or drug dependency to give them a sense of belonging. We have seen so many lives transformed. It is the support of organisations like Co-Ownership that enable us to continue our work that is proven to make a real impact in the daily lives of some of the most vulnerable in our communities.”

Emphasising the impact of the unique project Justin went on to explain how some thirteen homeless people who participated last year have since found their own accommodation or have returned home to family.

Mark Graham, Chief Executive at Co-Ownership, explained how the organisation is delighted to support such a “transformative” project.

“We’re thrilled to be able to provide grant funding to Street Soccer NI for their inspirational work. At Co-Ownership our ethos is to help people which mirrors what Street Soccer NI does. Street Soccer NI has proven itself an effective programme with so many of its players in recent years finding employment and suitable accommodation and we’re proud to lend our support to the project so it can continue to provide much needed resources to help even more.”

Street Soccer NI is an official partner of the Homeless World Cup Foundation, a charity which uses football to inspire people who are homeless to change their own lives and to change perceptions and attitudes towards people who are experiencing homelessness.

From November 13-18 two teams organised by Street Soccer NI will make the trip to the city of Zocalo, Mexico for the 16th annual Homeless World Cup, representing Northern Ireland.

Now in its second year, the Co-Ownership Social Fund is earmarked for groups and projects which help regenerate, rebuild, and revitalise neighbourhoods and communities, provide support to the elderly and disabled, and provide advice or educational services to promote financial capability, inclusion, energy efficiency or encourages biodiversity in the community.

Gillian Hughes, who oversees the social fund at Co-Ownership adds: “We were delighted to be able to continue to offer our social fund this year and saw an increase in the number of applications from projects right across Northern Ireland. The diversity of projects and their impact on local communities was really inspiring. With so many great projects and a limited budget, it was a difficult call to select the recipient of the funding. However, after careful consideration, Street Soccer NI was chosen as very a worthy recipient. Their project is aligned to Co-Ownership’s charitable purposes and we hope it will have a really positive long-term impact on participants’ lives.”