Co-Ownership marks 40 years with significant enhancements to its offering

Northern Ireland’s main provider of shared home ownership products is embarking on some of the most significant digital enhancements in its history as it marks 40 years in business. 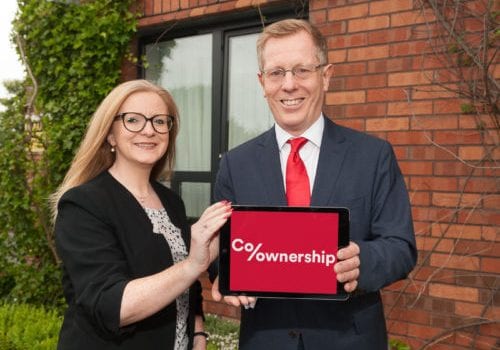 Co-Ownership, which has helped more than 27,000 people into home ownership since 1978, is investing significantly to speed up the home buying process and to put their customers on an equal footing with other buyers.

The announcement was made at a celebratory conference for industry and government partners last week to mark 40 years since Co-Ownership was founded. It took place at the Crowne Plaza Hotel, Belfast.

As part of the changes, which will come into effect after the summer, Co-Ownership is:

Mark Graham, CEO of Co-Ownership, explains: “We have taken on board feedback from customers and industry partners and are investing significantly to improve our services for them. We are delighted to announce these positive changes as part of our 40th anniversary celebrations.

“The outcome of the enhancements will be a much faster process for homebuyers, which will put them in a better position when bidding on a property, as they will be pre-approved and should be able to complete a purchase as quickly as any other kind of buyer,” he continues.

Co-Ownership is regulated and part-funded by the Department for Communities. Addressing the conference, the Department’s Housing Director, Deborah Brown congratulated Co-Ownership on its success over the last 40 years. She said: “With the support of Government, 27,000 people have been supported toward owning their own home through Co-ownership.  This is a magnificent achievement. Housing is an essential enabler for such a wide range of economic and social outcomes. The Department looks forward to its continued partnership working with Co-Ownership to help many more households fulfil their aspirations of homeownership.”

Co-Ownership has received funding to deliver 700 homes each year through a four-year Financial Transactions Capital (FTC) loan financed by the Department for Communities for 2015/16 – 2018/19.  The organisation delivered 803 homes in 2017/18.

Over its 40-year history, Co-Ownership has routinely adapted to a changing housing market and offers solutions to people struggling to buy a property by themselves.

It offers two key products, Co-Own, the organisation’s flagship product, and Rent to Own, a pilot scheme which was introduced in 2017.