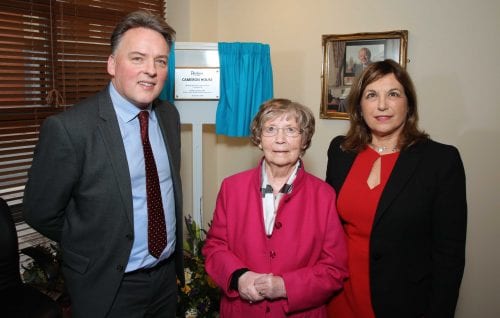 Radius Housing’s Holywood office has been renamed Cameron House, in honour of former Chairman William Cameron OBE, a pioneer of social housing in Northern Ireland who passed away in April last year. The late Chairman’s family joined staff from Radius Housing and many friends and colleagues whom he worked with over his long housing career in a special event to rename the building on Tuesday, 30th January.

William James Cameron, known to most as Billy, spent 55 years in the social housing sector. Billy played a pivotal role with the Northern Ireland Housing Executive during a period that saw the delivery of more than 80,000 homes. He occupied many senior posts including Chief Executive. After retirement his passion for housing continued as he joined the board of Fold Housing. During his time as Chair of Fold Housing, he led the association through a period of unprecedented growth. In recognition of Billy’s outstanding contribution to social housing in Northern Ireland, he was awarded an OBE by Her Majesty the Queen in 1995.

Speaking at the event, John McLean, Chief Executive of Radius Housing, who worked with Billy during his tenure as Chairman of Fold Housing Association, said: “Anyone who had the pleasure of meeting or working with Billy understood his steadfast commitment to social housing and the right of everyone to have a decent home. All of us who work in the sector have a debt of gratitude to people like Billy who helped shape the housing sector through difficult times and made it what it is today.”

Radius Chairperson Diana Fitzsimons added “We are delighted to be able to mark Billy’s achievements by renaming this building Cameron House. The Radius Board was delighted that Billy and his family accepted the invitation to name one of our key offices in his memory. Billy worked hard with visionary board members at the time to ensure Fold maximised its positive impact on vulnerable people throughout the community. We are very pleased that Jean and his family can be here today to share in this occasion.”

Cameron House in Holywood was formerly the headquarters of Fold Housing Association, which merged with Helm Housing in April 2017 to form Radius Housing. It provides housing, care and support to over 33,000 homes. Radius Housing is a social enterprise employing over 1,000 people and managing 12,000 properties in 80 towns across Northern Ireland. Radius provides supported housing with 24 hour care for frail and elderly people, people with dementia and those with learning difficulties; in addition it provides 14,000 day care placements. With a turnover of £85m per annum and private loans of £175m, Radius is a major developer of homes, aiming to commence over 400 new homes on sites this year.  Most notably Radius has plans to develop the former Visteon site with 240 private, social and affordable homes, community facilities and up to 60,000sqft of employment space.