Support services in Northern Ireland “on the edge” of collapse, housing experts warn

Some of Northern Ireland’s care and support services will collapse if significant funding is not found within the next year, a former housing minister and the head of an NI housing association have warned. 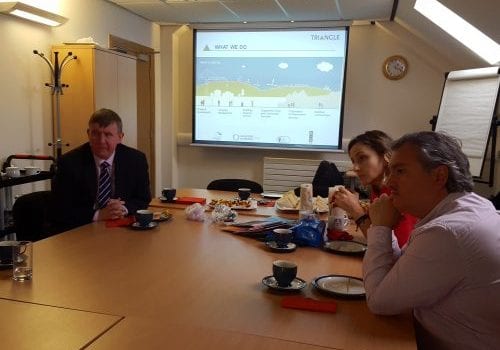 Chris Alexander, chief executive of Triangle Housing Association, a charity which provides homes and support services across the region, said: “If significant funding is not found within a year, you will see some services collapse.”

Mervyn Storey, MLA, former Minister for Social Development and Minister for Finance & Personnel, concurred, saying: “I agree with Chris’s assessment. If you fail to invest, you have no other choice but to face the consequences.”

The pair were speaking at a meeting with two Spanish housing experts who visited three of Triangle’s projects in Coleraine last Thursday.

Fermín Bravo is Director of Housing in the Asturias regional government and María Montes is Managing Director of VIPASA, the public company which manages the region’s social housing stock.

“We came to Northern Ireland because we don’t have housing associations in Spain and we wanted to see for ourselves what they do,” Mr Bravo explained. “We admire the way that local housing associations, like Triangle, are such an integral part of the communities which they serve: they are non-profit organisations, involving a lot of volunteers, who work hard to provide great homes and help build thriving communities.” 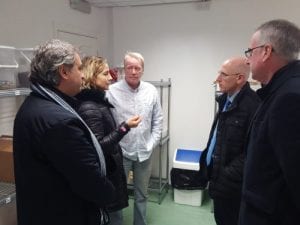 At a meeting in Triangle’s head office in Ballymoney afterwards, Mr Alexander explained that many of the association’s services are funded by the Supporting People programme, which faced a 5% funding cut last May. Following a lobbying campaign, a partial reinstatement of most of the funding was announced, on a non-recurring basis.

He pointed to research commissioned by the NI Council for Voluntary Action (NICVA) which shows that every £1 spent on Supporting People saves the public purse £1.90 on services that would have to be spent elsewhere such as in hospitals, nursing homes, hostels and prisons.

Mr Storey said that funding for such services is essential, and makes good economic sense, as problems can be dealt with before they become acute and, therefore, more expensive. “Housing associations are unique in that they don’t just deliver bricks and mortar places to live in. They, often working with partners in health and social care, provide vital, often complex, support services in away that the government probably can’t, which allows residents to live in their own homes and as an integrated part of the local community.”

This is critically important, he continued, because of Northern Ireland’s ageing population.

Speaking movingly of his own family, Mr Storey continued: “My father lives in sheltered accommodation. I know that, if he wasn’t getting that wraparound service of domiciliary care, he would be spending time in acute care at the hospital in Coleraine.”

During their visit to Northern Ireland, Mr Bravo and Ms Montes also met with: Nichola Mallon, MLA, chair of the All-Party Group on Housing, and learned first-hand about Radius, Abbeyfield & Wesley and Clanmil housing associations’ work supporting people with dementia; Housing Rights’ advocacy of tenants and helping prisoners prepare for life after release; and Co-Ownership’s schemes for helping people bridge the gap between private rental and home ownership.

The visit was organised by the Northern Ireland Federation of Housing Associations (NIFHA). Chief executive Ben Collins said: “We are delighted to have this opportunity to showcase some of the fantastic work that our associations do. Having a place to call home is one of our most basic needs: health, education and employment are almost impossible if you don’t have a roof over your head. Housing associations also provide many services to help our residents live as independently as possible as long as possible.”