The NIHE’s Independent Reference Group on fire safety in tower blocks has published its findings. 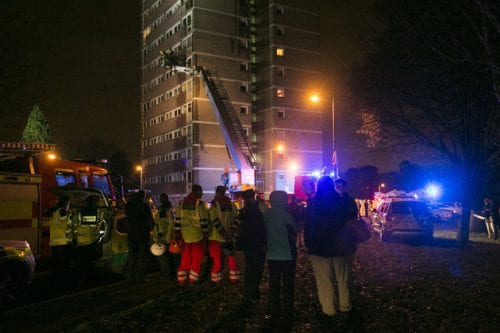 Following the tragic Grenfell Tower fire in June, the Board of the Housing Executive asked that an independent group should be established to review the cladding systems used on four of its residential tower blocks. This review was then extended to look at all aspects of
fire safety in the organisation’s 33 tower blocks and take into account any lessons from the Grenfell fire.

In a statement released today, the NIHE said the key findings include:
– The two cladding systems used in four Housing Executive tower blocks did not include the Aluminium Composite Material as found in Grenfell Tower.
– Both cladding systems had been subject to a full-scale fire test and they were found to be compliant with Building Regulations.
– Fire safety and building control inspections, as well as Fire Risk Assessments undertaken across all 33 Housing Executive tower blocks,  identified a number of areas of remedial work.
– As a result, the Housing Executive is progressing a detailed action plan to remedy Building Regulation contraventions and implement Northern Ireland Fire & Rescue Service recommendations.

The Independent Reference Group set out a number of recommendations which include:
– The remedial and enhancement work identified by the inspections and Fire Risk Assessments should be completed as soon as possible.
– The Housing Executive considers installing sprinkler systems within its high-rise accommodation.
– Future learning outcomes or recommendations from the Grenfell tragedy are considered and implemented where necessary by the Housing Executive as soon as practically possible.
– The cladding systems used on the four Housing Executive tower blocks should be assessed against any new regulatory standards which may arise from ongoing reviews.
– The Housing Executive enhances the resources within its existing compliance team to ensure a robust inspection, testing and maintenance regime is in place.
– All residents are updated through a further Housing Executive communication that sets out key findings for each block and what actions are being undertaken by way of mitigation.

The group was chaired by Professor Alastair Adair, Deputy Vice-Chancellor of Ulster University, and made up of officers from Northern Ireland Fire & Rescue Service, Building Control, the Housing Executive, the Department for Communities and the Department of
Finance.

Niall Sheridan, Group Director of Development & Assets, Choice Housing, sat on the Group as an Observer representing NIFHA. As part of that role, he provided feedback to the group on his knowledge of tower blocks in management in the Housing Association sector in Northern Ireland and feedback received from colleagues.

Commenting on the findings, he said: “Whilst the report focused on the NIHE tower blocks, the sector will benefit from the  recommendations in the report relating to best practice in active and passive fire protection systems, conducting fire risk assessments and communicating with our tenants on fire safety management policies and procedures.”

The primary focus of the group was on four tower blocks in which cladding systems were already installed (Cúchulainn House and Eithné House in North Belfast) and those in the process of being installed (Carnet House and Whincroft House in East Belfast). The investigation was extended to all 33 Housing Executive tower blocks in order to identify any potential fire risks associated with these in light of the Grenfell tragedy.

The Independent Reference Group also considered the recent fire at Coolmoyne house, Dunmurry, and has suggested that:
– The communication to residents of the ‘Stay Put’ statutory guidance is reviewed and enhanced to ensure fire safety evacuation procedures are clearly understood; those residents in each block potentially requiring assistance are identified.

Professor Alastair Adair said: “The investigations of cladding systems, fire safety measures and the risk assessments across all 33 Housing Executive tower blocks have highlighted that there are necessary actions required to ensure buildings are safer for residents. We recommend that this work is carried out as soon as possible. The group has made a number of recommendations. For example we have suggested that the Housing Executive consider the installation of sprinklers as a fire suppression measure to give greater confidence to residents.

“Whilst is it never possible to give 100% assurance on the safety of any building, the group has been reassured that the work carried out prior and subsequent to the Grenfell fire, has put residents’ safety first. We are also confident that remedial measures and enhancements which the Housing Executive plans to do, will provide extra reassurance to residents and others regarding fire safety in all tower blocks.

“The Independent Reference Group commends the Housing Executive and representatives of the contributing statutory agencies for the priority they attached to fire safety. This was evidenced in the proactive manner in which the agencies reviewed the cladding systems and the details of the full scale fire tests, undertaken at an early stage of design development, to provide assurance on fire safety. This highlighted the benefits of an inter-agency collaborative approach to review the construction of the cladding systems and to ultimately ensure they are fit for purpose.”