The deadline for nominations in the Northern Ireland Housing Council Awards has been extended to to Thursday, 11th January. 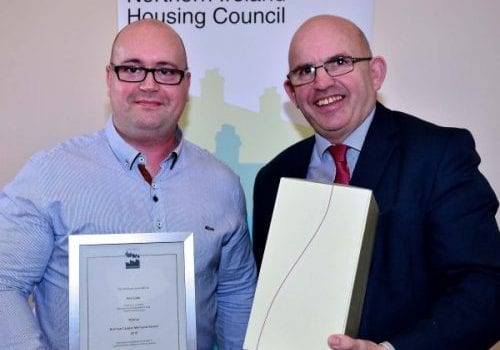 The Housing Council has maintained a long standing interest in the achievement of high standards in housing and the delivery of housing services. Members are committed to recognising the contribution of staff in the Housing Executive and in the Housing Association movement, to excellence in the housing field. Accordingly, the Housing Council makes a number of awards annually.

There are currently four awards for which nominations are invited – the Norman Capper Memorial Trophy; the Jack Bailie Award, the JR Gorman Trophy and the Jim Speers Special Award.

The  Norman Capper Memorial Trophy is presented for excellence in the field of customer/public relations or communications. Does a member of staff in your office excel at dealing with the public, present a very positive image of the work in your organisation and is he/she really committed to quality service with the interests of the customer coming first? If so, show your appreciation and nominate them. NC Nomination Form

The Jack Bailie Award honours a member of staff who introduces an added-value initiative in the delivery of housing services e.g. in procurement, administration, shared services, etc.The initiative must have relevance to the work of your organisation, it must be measurable and it must demonstrate cost savings, increased activity or improved service. JB Nomination Form

The JR Gorman Trophy is awarded to the District Maintenance Officer in the Housing Executive, who has, in the organisation’s opinion, demonstrated the greatest efficiency in response maintenance. Performance is assessed in terms of achieving a high proportion of works orders completed within response times and value for money. JRG Nomination Form

The Jim Speers Special Award is given in recognition of Councillor Speers’ long service, dedication to housing in Northern Ireland and long service as Chairman of the Northern Ireland Housing Council. Given Councillor Speers’ particular interest in the provision of social and special needs housing, the award will be made to the best Housing Association scheme each year. The scheme must have been built within the last 3 years and occupied for at least 12 months. JS Nomination Form

To make a nomination, download and complete the relevant pro-forma and follow the instructions on the general information document.