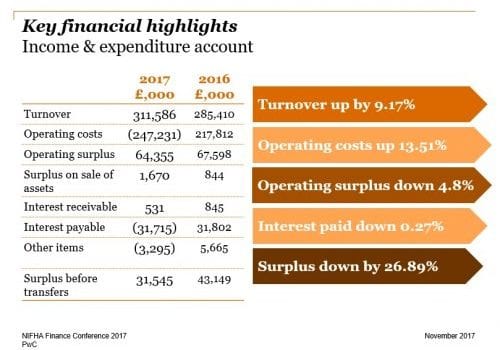 The figures, contained in the NI Federation of Housing Associations’ (NIFHA) 2017 Global Sector Accounts, were revealed on Wednesday.

The report was prepared by Martin Pitt of Pricewaterhouse Coopers (PwC). The accounts show that the sector continues to be a key economic driver in the region, with annual turnover of £311.6m and total assets of £3.5bn.

Housing associations, which are all among the largest social enterprises and charities in Northern Ireland, employ 3,226 staff and manage 49,332 housing units. In addition, housing associations and their partners spend £8.7m each year investing in other facilities and services in their local communities.

The NIFHA 2017 Global Sector Accounts were launched at the organisation’s annual Finance Conference, held at the Stormont Hotel in Belfast on Wednesday.

Welcoming the figures, NIFHA chief executive Ben Collins said: “The report presents a picture of a strong and resilient sector, showing balance sheet growth and the generation of surpluses to fund the building of new homes and ensure continued delivery of quality services to tenants.

“However,” he added, “it should be noted that overheads have increased by 13.5% and surpluses decreased by 4.8% from 2015/2106, which highlights the challenging environment in which housing associations operate.”

One of the most significant challenges during the year was the collapse of the NI Executive in January which led to a delay in the setting of rates, and a decrease in the 2017/2018 development target due to a reduction in the capital spend budget.

Other issues affecting the sector include the potential impacts of Brexit, reduced revenue streams – especially within the Supporting People programme – and welfare reform including the introduction of Universal Credit.

Mr Collins commented, “Housing associations continue to provide much needed homes and services which otherwise would not be delivered.

“We are keen to do more, working in partnership with the public and private sectors.

“Focusing on continued efficiency and securing a positive public policy environment will be key to achieving this.”