Peter Shanks (second from right) with Ciaran Shannon, Anthony Kerr and Damian Murhphy from Newington Housing at #NIFHA17 Sincere thanks to Peter Shanks of Campbell Tickell for this incisive summary of the NIFHA Annual Conference, published in his first housing blog. 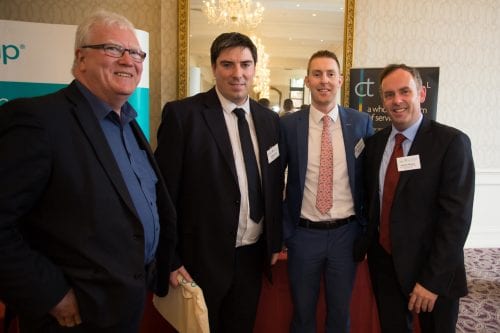 Last week, two hundred delegates descended on the picturesque coastal town of Newcastle, County Down, for the annual NIFHA conference. Normally, conference-goers take to their seats early on day one in anticipation of the Ministerial Address. However, these are not normal times in Northern Ireland. In his opening remarks, NIFHA Chair, Alan Shannon, explained why: ‘we have had four periods of devolution and three periods of direct rule, but this is the first time we have had no government’. Thus, no Ministerial Address at #NIFHA17!

Ian Snowden, Director of Housing, Policy and Performance at the Department for Communities initiated proceedings with a reminder of the civil service’s powers and limitations in the wake of the current political impasse. He called for social housing starts to be translated into quicker completion and allocation times, followed by a long-awaited announcement on the review of social housing allocations. Public consultation on reform proposals runs to 21 December 2017. Mr Snowden stated that civil servants are ‘working hard’ on a draft bill to reverse ONS’s classification decision once political institutions are restored. More ominously for housing associations, he suggested that in future some funds earmarked for social housing development may be redirected to upgrade the Northern Ireland Housing Executive’s deteriorating stock.

Have you completed the NIFHA17 delegate survey?

A timely first plenary considered the implications of Universal Credit for tenants and housing associations; its phased roll out commenced the previous day. Many of the delegates I spoke with at the conference supported the principles behind Universal Credit, but raised major concerns about operational and design issues. NIFHA’s Practice Officer, Paul Armstrong, outlined such concerns: six weeks and sometimes longer waiting times for tenants to receive payment; authorisation flaws with the government’s Verify website for citizens with Northern Ireland driving licences and Irish passports; and landlord payment issues triggered by changes in circumstances during the assessment period. Many delegates’ heads could be seen shaking in disbelief when they heard how it is cheaper for tenants to phone door step lenders than to call the Universal Credit helpline!