Ulster Bank backs Association’s plans to develop over 200 new homes over the next two years. One of Northern Ireland’s largest housing associations has secured more than £10 million in finance from Ulster Bank to deliver a major programme to build new homes. 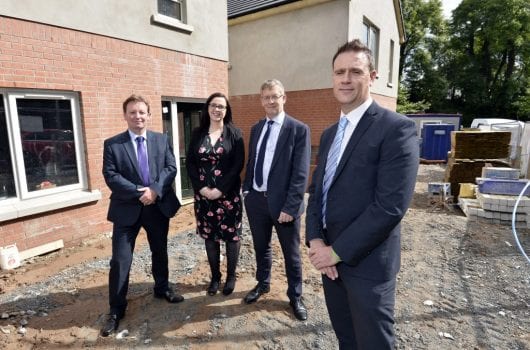 Habinteg Housing Association, which marks its 40th year in 2017, plans to develop hundreds of properties with the bank’s support.

Development is already underway at schemes in Londonderry, Lisburn, Newry, Coalisland and Belfast, with a further 200 homes to follow in other locations.

Darren McKinney, Chief Executive of Habinteg Housing Association says: “We have been operating in Northern Ireland for four decades and during that time, Ulster Bank has become an increasingly valued partner, alongside support from the Department for Communities and NI Housing Executive, to help us deliver new homes across Northern Ireland.”

“The long-term financial arrangements between Habinteg and Ulster Bank help underpin our programme of development, which has widespread economic and social benefits. Ultimately it will allow us to provide new homes for some of the 37,000 people on the waiting list for social housing in Northern Ireland,” he adds.