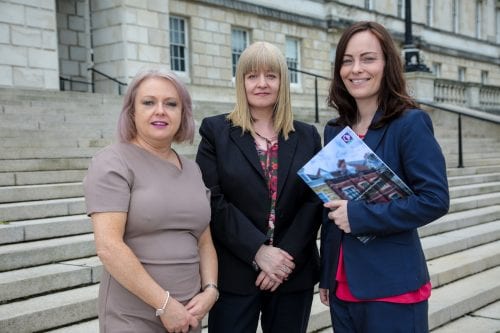 The extension of the Local Housing Allowance (LHA) cap to the social rented sector is an area of particular concern for NIFHA and the wider housing association sector. The CIH report supports key findings from extensive research carried out by NIFHA into the impact the LHA cap will have on housing associations and their tenants.

Jennie Donald, Deputy Chief Executive, NIFHA said: “We endorse the recommendations made in the CIH report, particularly a review of local Broad Rental Market Areas (BRMA), and an evaluation of the current funding model for social housing. We believe an increase in grant funding will be critical to support the continued delivery of new homes if the LHA cap is introduced.

“NIFHA continues to research the impact of the LHA cap and other welfare changes to ensure housing associations can effectively support existing and future tenants across Northern Ireland. We are sharing this research with colleagues in the Department for Communities and Housing Executive to help inform consideration of the potential impacts and possible mitigations.”

The report, which was launched at Stormont this week with the All Party Group on Housing, says that the planned cuts would not only increase the risk of rent arrears, eviction and homelessness, but they would also have a knock on effect for the ability to build new social homes.

The report recommends that urgent action be taken to introduce changes in Northern Ireland that lessen these impacts.

Nicola McCrudden, CIH director for Northern Ireland said: “The Conservative government is planning a raft of changes to housing benefit that will put people’s homes at risk and threaten the ability to build new social housing in some areas.

“Currently tens of thousands of working-age social housing tenants are protected against the bedroom tax – however these additional changes will see pensioners affected for the first time and single people under 35 strongly impacted. Unless action is taken, tenancies will be put at risk.

“The absence of the Stormont executive isn’t helping – we need a devolved administration up and running to prepare for these legislative changes. It is vital to ensure we keep roofs over people’s heads and that we scale up the level of social housebuilding that we desperately need.”

Nichola Mallon MLA, chair of the NI Assembly All Party Group on Housing said: “We have a housing crisis. This latest round of Tory cuts will only deepen that crisis and hit some of our most vulnerable hardest. When tenants of working age were facing and fearing the Bedroom Tax, the Executive took action to protect them and their families.

“Now pensioners are being hit with the bedroom tax. These pensioners and all those affected by this latest cut to housing benefit deserve and need an Executive that will take urgent action to protect them.”

NIFHA has completed extensive research on the matter, which can be viewed here.  We have also researched the implications of under occupation, which may further impact social housing when LHA is introduced. Our findings can be viewed here.