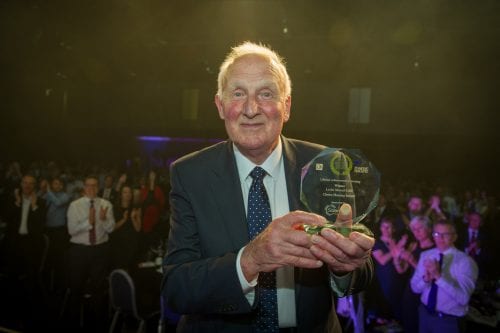 Organised jointly by the Chartered Institute of Housing (CIH) and Inside Housing, the Housing Heroes Awards is one of the largest annual housing events in the United Kingdom and recognises exceptional individuals who have improved lives and communities through their service.

For more than four decades, former farmer and politician Leslie Morrell has been an advocate for better social housing and believed it could contribute positively towards a peaceful and reconciled society.  Despite significant personal risk at the height of the Troubles, he worked to bring leaders from all communities together and with local and regional government to establish the first housing associations.

“It is surprising and humbling to win an award like this. My focus has always been on collaborating and sharing power with as many people as possible to create the conditions for everyone to move forward. Very many other people took great leaps of faith to make it possible and this award is for them also.

“When we started out we know that something had to be done urgently to improve the lives of people and communities in Northern Ireland. We had no idea at the time exactly how housing associations would work here, we just knew that good homes should be the heart of social change. There is still much work to do of course, but we can be proud of the difference we’ve made and are continuing to make.”

Leslie Morrell remains Honorary President of Choice Housing which can trace its roots back to James Butcher Housing Association, which he established in 1976.  Michael McDonnell, Group Chief Executive of Choice Housing said:

“The housing association movement has evolved significantly in the last four decades, but it continues to reflect the original values and vision that Leslie set out. His contribution to a peaceful, reconciled society is evident in every part of Northern Ireland. His influence enabled housing to underpin social integration and helped pave the way for a shared future.

“Today housing associations provide a third of affordable homes in Northern Ireland, employ more than 3,000 people and manage 44,000 homes, as well as providing high-quality care and support and many community services. It is impossible to imagine the movement without Leslie Morrell and this honour is richly deserved.”