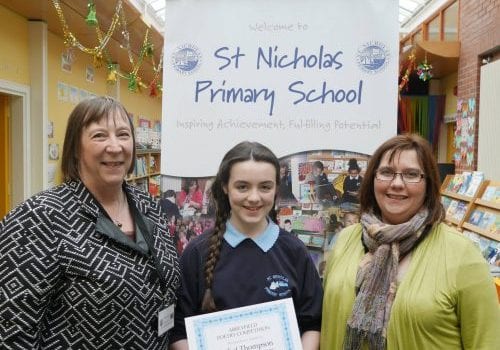 The winners of a recent Young Poet’s competition, which was organised by Abbeyfield & Wesley Housing Association to celebrate the contribution that older people make in society, have been announced.

Accomplished songwriter and performer Duke Special judged the competition and read out the overall winning poems at a special event to mark Abbeyfield’s 60th anniversary in Long Gallery, Stormont.

Each category winner received a prize and commendation certificate. The competition winners are:

Poem entitled “My Very Own Grandad” 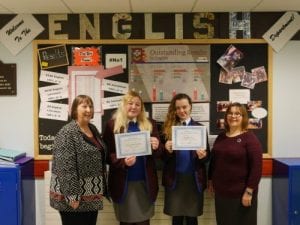 Cathal Brolly (16) from Jordanstown School for children with hearing and visual impairment. 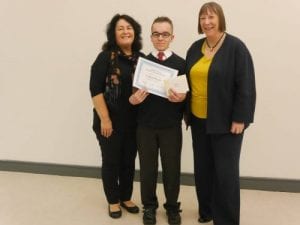 “In recognition of the role that older people have in our society, and to mark Abbeyfield’s 60th anniversary last year, we asked local young people to write a poem about older people. The poem could relate to any aspect of ageing.

“We have been absolutely delighted with the response. The entries were diverse and it was clear that all of the entrants put a great deal of effort and thought into the creative process.  Each poem was unique.  Young people had reflected on their own personal experience and thought about various aspects of ageing, the connections that people make with others during the course of their life, the impact they have on other people’s world and their legacy. I would like to thank everyone who has spent time on preparing an entry and I would also like to congratulate all of the winners. Your work will be shared extensively and I’m sure it will inspire people of all ages.”

Mrs Gilpin added  “It is important for young people to be aware of the issues that face older people as it is projected that from 2028 onwards there will be more people aged 65 and over than children in Northern Ireland.”

“I am delighted to be involved with Abbeyfield as they clearly recognise the value and potential of people no matter what age they are.  Like many of us, I have family and friends who are reaching a time in their lives when they need that extra bit of support and care and I’m really pleased that Abbeyfield have organised this poetry competition to highlight and celebrate the role of older people in society.”

Discussing the winning entries Duke Special said:  “To me, one aspect of poetry is about distilling words down to just what is needed in an attempt to paint a picture or tell a story or convey an emotion.  In Isabel Thomson’s poem ‘Nanny Nellie’ she has done this really well with some great lines like ‘false teeth talk’ and the description of how friendly chats can get in the way of what you’re meant to be doing.  This made me be able to picture this nanny and the kind of person she is.

“Sophie Fox’s description of her ‘very own grandad’ uses this idea of lists to good effect and conjures up a very generous and somewhat mischievous grandparent who has taught her many useful things including how to take a short sleep when no one is looking.

“Cathal Brolly’s poem ‘The Memory Book’ uses very few words to describe in a vivid way, someone in the winter of their life who still has pages to write.  The story is not over.

It was very difficult to choose an overall winner but since I must, I think it will have to be Cathal’s Memory Book.”